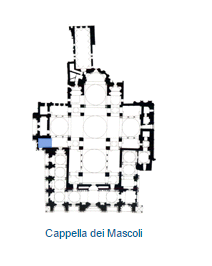 The Chapel of the Madonna del Mascoli is beyond the end of the Transept where the entrance to the Chapel of St. Isadore is situated. Since 1618 it has belonged to a Confraternity of exclusively male worshippers established in St. Mark’s in the 12th century and based first in the crypt, then at the altar of St. John, now of the Nicopeia Virgin.

There is an important mosaic cycle on the chapel vault, begun in the first half of the 15th century by the Venetian Michele Giambono. The decoration was inspired by the chapel’s original dedication to the Virgin. In fact the canonical episodes of her life are illustrated in a sequence starting from the left side: the Birth, the Presentation at the Temple, the Annunciation, the Visitation and the Death (or Dormitio Virginis).
The Annunciation in the large lunette at the back evinces a typically Gothic grace and gentleness with a corresponding loveliness in sign and colour. The Birth of the Virgin and the Presentation at the Temple are dominated by two Gothic architectures of crystalline beauty while the figures are characterised by soft modelling and delicate colours.
The Visitation on the right wall of the chapel seems to belong to the late Gothic period, at least in the lower part, whereas above the visible “cut” the architectonic grouping is dominated by a humanistic setting and strikingly renaissance schemes. In theDormitio only the Apostles on the right belong to the Gothic decoration while the other Apostles, the Virgin and the architecture are configured in the most typical language of Andrea del Castagno: this may be seen not only in the expressionism of the faces and the plastic modelling of the figures wrapped in swollen drapery and with cutting profiles, but also in the red Thessaly marble slabs covering the pillars of the immense and spacious arch of “classical” taste that acts as background to the figures of the Apostles who are rigorously detached from it. 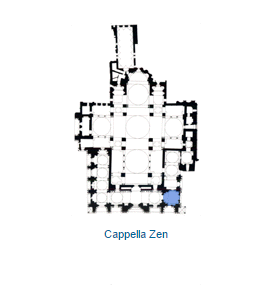 Entry to the Zen Chapel is from the Baptistery or the atrium where there is a very fine bronze arched gate of antique execution (5th – 6th century), brought to Venice from Constantinople.
This south-west corner was once the vestibule of the sea gate. When Cardinal Giambattista Zen died in 1501 the Lords agreed that a funerary chapel be built in his honour.

The 13th century vault mosaics and the older ones above the portal document the original function of an important entrance. The vault has two orders with 12 scenes of Events in the Life of St. Mark. In the semi-dome above the portal is the Virgin with Child between Two Angels in veneration. This mosaic was completely redone in the 19th century on the old Byzantine traces. Farther down there are eight prophets, four beautiful marble sculptures and four mosaics.

THE CHAPEL OF ST. ISADORE 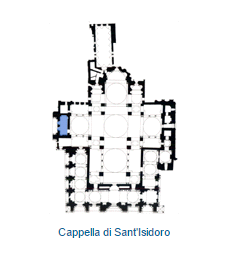 The remains of this Greek saint were brought to Venice from Chios in 1125 at the behest of the doge Domenico Michiel whose devotion to him recalls his devotion to St. Mark. The small chapel dedicated to the saint is accessed from the north transept.
These mosaics are an important cycle of Venetian art that has come down to us almost immune to restoration. In the simplicity of execution there is a notable narrative expression full of the character proper to the Venetian school of painting.

The vault mosaics narrate, in two orders one above the other, episodes from the life of St. Isadore on the Island of Chios and the transportation of the saint’s body to Venice.
On the lunette above the altar: Christ between St. Mark and St. Isadore; on that of the opposite wall the Virgin between St. John The Baptist and St. Nicholas.
The two lunette mosaics are linked more to the Byzantine iconographic tradition, whereas the realistic narrations of the stories of St. Isadore were more open to western influences.
These very precious mosaics date to the mid 14th century when the doge Andrea Dandolo wanted to create, together with the Baptistery, this chapel in the saint’s honour